While I don’t know about you, I’ve learned that starting something new comes with its share of challenges. My January Rest is no different. And each year presents a different set of unique circumstances in which to attempt The Rest.

This year my dad’s failing health triggers my desire to comfort myself. And because of the stress, I find myself struggling more with The List; especially avoiding sugar and avoiding my go-to’s for comfort. The Rest can cause internal conflict.

For example in January, I rest from different things from year to year, like sugar, coffee, dining out, etc. Why, because these are things I love and often go to as a means of comfort. Am I tired? Have a cup of coffee. Am I bored? Have a cup of coffee. Am I sad? Let’s have a little treat. When instead the best thing to do, would be rest if I am tired, find something meaningful to read or do (or even a chore that I’ve been avoiding) if I am bored, or deal with the reason for being sad, instead of medicating myself with a comfort item.

My January Rest helps bring these tendencies, ones known and those unknown, to the surface. Once at the surface, I want to “comfort” them (sadness, loneliness, stress, frustration, etc). But, when I’ve said no, that I am resting from certain comfort items, I either fail and blow my boundary or chose a healthier way to deal with what is tempting me to comfort myself. By setting boundaries for myself, at least I know if I am succeeding or failing. Otherwise, I wander around in a boundaryless state.

Years ago while in Chicago on our anniversary, I had the pleasure of attending a performance of The Screwtape Letters by CS Lewis. While I was enthralled, my husband napped. Once I elbowed him and told him he was taking an expensive nap! While he napped, I was tormented by truth. You see, there was this old woman, who thought of herself as a modest person, who only simply wanted tea and toast, who was really “no bother at all.” In reality, she was a tyrant and a slave to her never ending, always unsatisfiable desires. Yet in her mind, all she wanted was…a hot cup of tea…

You can read an excerpt below if you wish. Or, read the whole thing.

The real value of the quiet, unobtrusive work which Glubose has been doing for years on this old woman can be gauged by the way in which her belly now dominates her whole life. The woman is in what may be called the “All-I-want” state of mind. All she wants is a cup of tea properly made, or an egg properly boiled, or a slice of bread properly toasted. But she never finds any servant or any friend who can do these simple things “properly”-because her “properly” conceals an insatiable demand for the exact, and almost impossible, palatal pleasures which she imagines she remembers from the past; a past described by her as “the days when you could get good servants” but known to us as the days when her senses were more easily pleased and she had pleasures of other kinds which made her less dependent on those of the table. Meanwhile, the daily disappointment produces daily ill temper: cooks give notice and friendships are cooled. If ever the Enemy introduces into her mind a faint suspicion that she is too interested in food, Glubose counters it by suggesting to her that she doesn’t mind what she eats herself but “does like to have things nice for her boy”. In fact, of course, her greed has been one of the chief sources of his domestic discomfort for many years.

Why was I so convicted by this part of the play? It seemed I could never be fully satisfied with my morning cup of coffee. Satisfaction eluded me! It was either not strong enough, not hot enough, not the right blend, not quite enough cream or perhaps it wasn’t fresh anymore? And I was even picky about which cup I drank it from! After getting home from our trip, I “rested” from my desire for a perfect cup of coffee. For a season, I drank a cup of black coffee, from the same cup. I was thankful for each cup. You know what? I began to enjoy what I did have, instead of what I could never have, when I was chasing the elusive perfect cup of coffee!

Which brings me to now. I still don’t like coffee that isn’t hot. Or fresh. Luke warm, I prefer to spit it out. I’m drinking stale, almost cold coffee as I write. Blah. Yuck. Then why am I drinking it? Because I made a carafe of coffee for the First Friday event at my art studio, and I had quite a bit left over. Coffee is expensive, and I brewed organic fair trade coffee, rather than buy more (use what I already have for MJR). When I got home, I put it in a quart jar and placed it in the refrigerator. Out of sight, out of mind. Until… 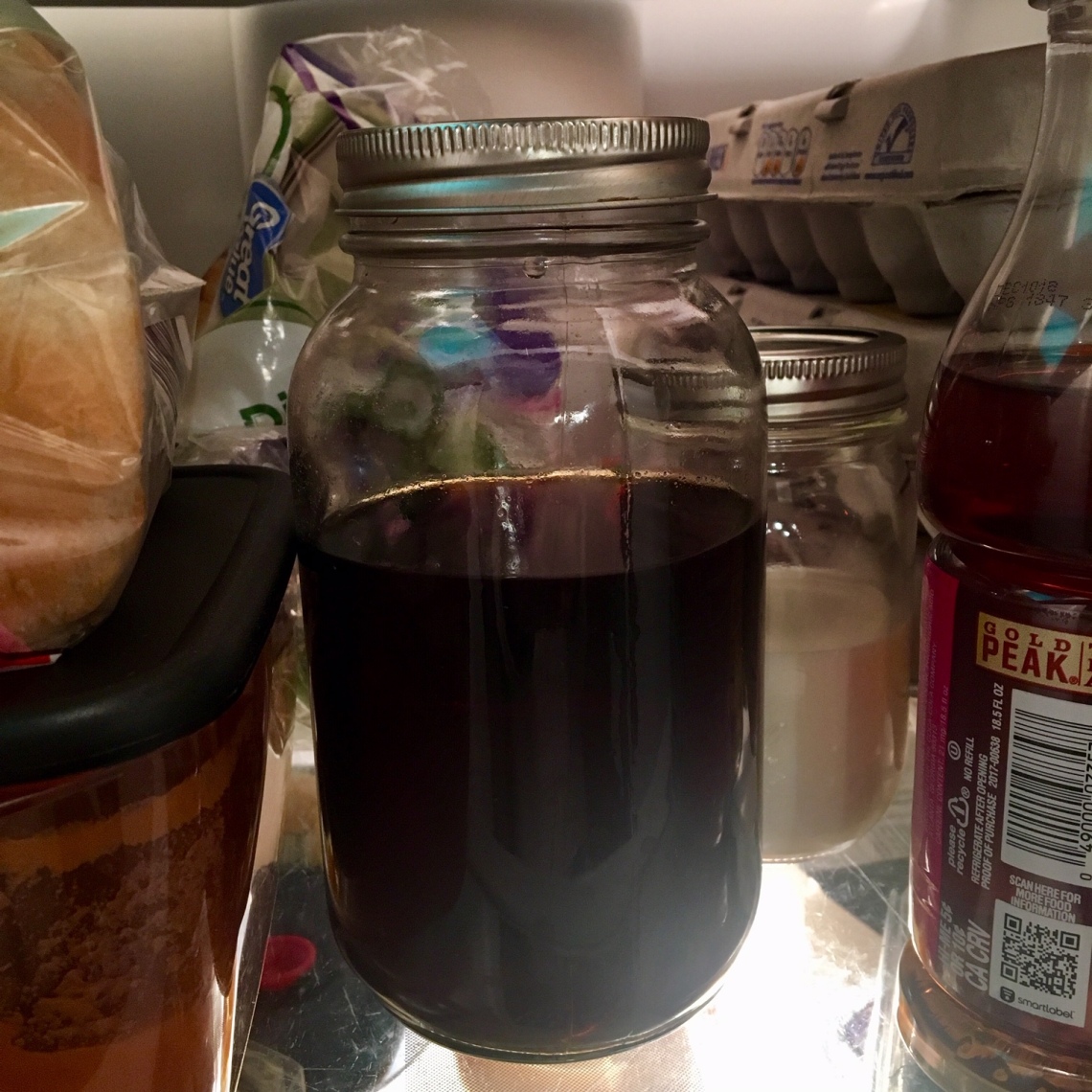 It’s time to write my post and I am thinking of that piping hot cup of coffee when my conscience is pricked. I don’t want that cold coffee in the fridge. I know it won’t taste as good as a freshly brewed cup of coffee. I prefer fresh. But, isn’t that the point? I could cater to my tastes, and make a fresh cup. Or, I could rest and use what I already have. Organic, fair trade coffee (which was on a great sale, and that is why I got it to begin with) was sitting in my refrigerator, waiting to be consumed.

If I keep catering to my tastes, I become increasingly picky. Maybe it’s just me. Or, maybe it is many of us.

My January Rest keeps the right focus in front of me. Would it have been terrible to brew a fresh cup of coffee. No. And I am sure I’ll use up the rest of the refrigerated coffee, but because of MJR, my thoughts went to the many reasons why I “rest” in January. So I reheated a cup of coffee.

A great example that comes to mind as far as mindfulness, is that for years, my husband and I were in a couples group. We only met once a month, and often we were scrambling to read our material right before our group met. Sometimes I felt guilty about not being more prepared. However what I learned was that after our group stopped meeting, was how much that once-per-month kept healthy principles in the front of our mind and at the top of our list of practices. In this world, the tyranny of the urgent takes over. And the urgent, not what’s best, often takes precedence. I was in finance for twenty years and every year we were trained on what to do if we were robbed. They said that we would either do as we were trained, or if not trained, we would panic. Training is of value, and sometimes even life or death.

Our couples group, bank robbery training, and My January Rest keeps what I value as important before me, and sometimes that means taking away, in order to regain something lost: like enjoyment, contentment, pleasure, wonderment, and even discipline.

Physical rest is also a goal for MJR. How is that going? More unrest. I’ve stayed up later because it is still our daughter’s holiday school break. Happily I’ve been able to sleep in a bit more some mornings. But I’ve had a couple of sleepless times and now I know why. I love mint tea and since I can’t have sugar in my coffee, I’ve been drinking more tea. Little did I know that one of my teas was not herbal after all, but a blend of black tea and spearmint. I’m a decaf gal, even my coffee is decaf (which I realize has a spot of caffeine). So the other night, when I downed the rest of a large container of mint tea, as to not waste it, I really set myself up for a long night.

After a couple times of not sleeping, I happened to look at the tea box, because I was curious to see if it was spearmint (which is what I learned you use in Turkish Red Lentil soup), I saw the alarming words black tea. Mystery solved and I hope I rest well tonight.

Six days in and I think I am settling in to My Rest. Struggling some, but that is to be expected. There is grace. And each day is new. Later I’ll share about fixes and flops (if there are any), cheats and temptations (of course there are!).

I wish you the best 2019 and I hope that you find your version of rest that nourishes your soul.

Much like the Psalmists, I struggle with trying to make sense of the hard things in life. Where once inclined to hide, stepping out into the light has left me uncovered. Writing takes the fuzzy, nebulous feelings and harnesses them into thoughts I can better process. I desire my words to be tasty bites of refreshment for your day.
Loading Comments...
%d bloggers like this: