It’s been over two full weeks and I haven’t been to the grocery store yet. I think the only things we have purchased was milk plus lettuce when I had Tony shop for needed items to take a meal to a family get together.

Instead of getting multiple varieties of greens as per normal, I’m using up what we still have. I prefer the mixed varieties, but the point is: eat what I have instead of catering to preference and in this case, even if it is a healthier preference. Next trip I’ll get more fresh produce for our home. He on the other hand, has been shopping. He purchased hotdogs and buns for work and a chainsaw which was his belated Christmas gift. I don’t make him adhere to My January Rest, but he does support me in the home. He’s been purchasing supplemental tools and things needed to clean up the woods behind our church after the ice storm. Good investment.

And he stopped by the store to purchase flowers, twice.

Friday I mentioned I was hungry for Thai. Knowing I try not to spend money in January, my friend mused that she could take me out to Thai, and I reminded her that I try not to dine out in January. Then she said that she could order out and pick up. I agreed, but in the spirit of MJR, we opted to dine in, at her place. She fixed a lovely spread of healthy food and sent me home with a banana that I had been ogling over, but was too full to eat. It’s been over a week, I think, since I had a real honest to goodness yellow banana. I still have apples and oranges to eat before purchasing any fresh fruit. After our dinner, she sent me home with some canned soups that she will not eat and my family will. She also sent some sweet treats. She too is doing a form of MJR which is why she passed along what she knew she wouldn’t use. We had a slow meal and a long, heartfelt talk. This is part of what MJR is designed for—rest for my soul.

Another friend noted that I am busier this January than most. True. She asked how I was getting any rest in MJR. Fair question. See, I told you that public accountability is good! I’ve been blessed to get several substantial impromptu rest breaks:

MJR amuses me and gives me material to work with. Another friend was nearly scared off when I invited her to lunch at my house for our next business work date. As it turns out, she’s been reading MJR. She’s a bright lady and she realized the meeting is toward the end of the month. Being the creative person that she is, she began to fill in the blanks and began to anticipate all sorts of unsavory lunch options. I assured her she was safe and I’d only serve what was in good taste and tasted good. I do have a bit of a phobia about food freshness. So while I push my boundaries during MJR as to not be wasteful, I won’t do that to friends.

Plot twist—as of yesterday, as if MJR wasn’t challenging enough, I finally decided to try 100% gluten free for two to three weeks. If I’m going to do it, waiting won’t make it much easier. The strict part will be over by the time our house guests arrive in February. I have a bean surplus, so I could live off beans for the rest of the month. It might not be exciting, but I won’t starve.

MJR confession: I’ve been eating more sweets than planned. My daughter has been holding me accountable and asking why I’m eating certain things. I’ve been in the middle of changing my diet for health reasons, but changing too many variables at once makes discerning what-is-what harder. My friend, a dietary specialist, suggested removing only one thing at a time. That is my excuse for adding some sugar back in. Insert smiley face here and a happy dance too. I’ll attempt to be true to my word. Still no sugar or cream in my coffee or foo foo coffee drinks. Truly I’m trying to eat very little sweets. I really, really hate focusing on food! I will attempt not to whine about this change, but going GF most certainly is helping me whittle down the beans.

Cooking spray is one item that we might run out of. Another is corn starch. What I cannot understand, which is even more baffling than last year’s discovery that we had three boxes of cornstarch, is how we are now running out! I don’t remember giving any away, but I must have. Normally, I would keep one box. We don’t use it much except to thicken things like the sauce for Sesame Ginger Chicken. Clueless; I am clueless!

I have our February grocery list started. We are out of corn, black olives, yellow onions, running out of napkins (yes, I have been using cloth) and a lot of fresh stuff. 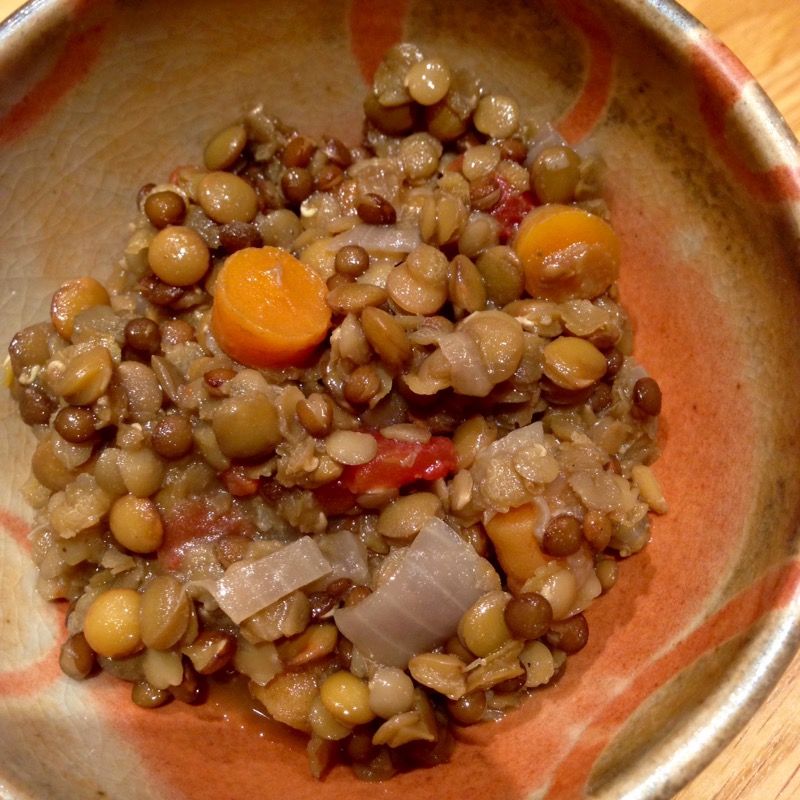 My lentil stew was lean because I didn’t have much to put in it. Too bad I won’t be able to sop it up with a warm crusty piece of garlic bread. Oh, I did say I wouldn’t whine, didn’t I? Sorry.

Stay tuned. Next post will be about our MJR fun food antics. I can still smell the burnt potatoes.

Are you doing a version of MJR? What are some of your everyday life ways of appreciating what you have?

Much like the Psalmists, I struggle with trying to make sense of the hard things in life. Where once inclined to hide, stepping out into the light has left me uncovered. Writing takes the fuzzy, nebulous feelings and harnesses them into thoughts I can better process. I desire my words to be tasty bites of refreshment for your day.
%d bloggers like this: